We took off this weekend with friends M & R for a visit to Bairnsdale on the East Gippsland coast. Our friends had been there earlier in the year and decided they wanted a return visit. Having arrived mid-Friday afternoon we checked out the various locations of op-shops for the next days visits and found the pub, the Grand Terminus, where we were eating that night.

Dinner was very good. The Grand Terminus is one of those new pubs with bistro that are really lifting the standards of food in regional towns. While the food offered was to some degrees ‘standard’, I had caramelised pork belly, TB and M had lambshanks and R had fish and chips, all the meals were really well cooked and flavoursome. We washed the meal down with a local Sarsfield Pinot Noir (the wine list had a good selection of local wines as well as other Australian wines). To top it off the service was excellent and attentive. One staff member immediately spotted a dropped knife and replaced it before we even had a chance to ask for another. However dinner was forgotten as with other diners in the bistro we saw the first horrific footage of the Japanese earthquake and tsunami.

Saturday morning saw our first outing to the op shops where we each found a pleasing selection of objects. R’s happy find was a David Douglas Flameware coffee percolator for $2. This is a gem of 1960’s design from the US. You can find lots of the company’s coffee pots and fondue sets on the various interweb sale sites. I haven’t been able to find out much as yet who did the designs, David Douglas set up the company but was apparently not the designer per se. All components of the coffee pot were present and correct so it was soon pressed into use. 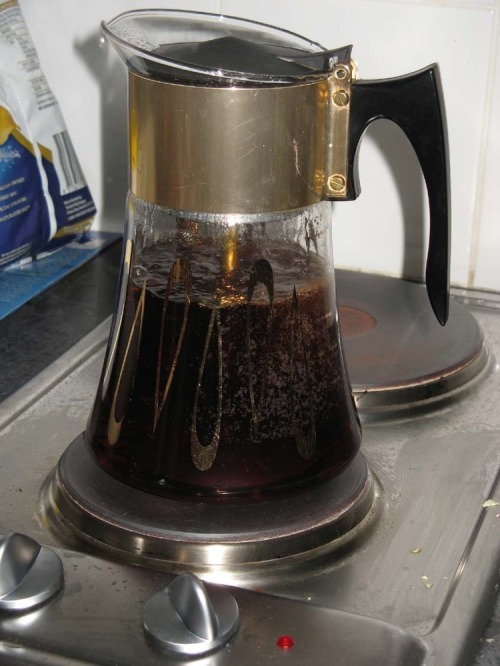 I then found some unidentified make of salt and pepper shakers, I’m guessing from the late 1950’s or early 1960’s, a simple design in turquoise with white ribs about 15 cms high.

Lunch was created out of a selection of local products from the Bairnsdale Gourmet Deli, including mixed vegetable and spice, morrocan vegetable and beetroot dips. On the more substantial side we had some of their pork pies and some locally made Maffra cheddar. We were also able to have a reviving coffee and cake at the deli before heading off to the second hand bookshop. A happy mornings hunting was had by all.

In the afternoon we headed off to Stratford on the Avon River (not that one) where in one locally developed community park we read the amazing story of the circus elephant that was killed when the truck it was travelling went under a bridge that was too low – not nice. Keeping our heads down we continued on to Sale where we were lucky to get into the Gippsland Regional Gallery just before closing time, where we caught up with the exhibition of the props, sets and character’s from Adam Elliot’s fantastic animated film Mary and Max (2009). This is a great exhibition and it was amazing being able to look at the models up close and personal.

Thanks for leaving a comment. Let us know your experiences. Cancel reply