I love colour in the garden, something most of you regular readers will know. This time it’s not purple I’m praising, but red.

Of course there are the strawberries looking very decorative against the new mosaics.

Then in the ‘three sisters’ garden bed, my scarlet runner beans are flowering. Hopefully plenty of beans will follow. 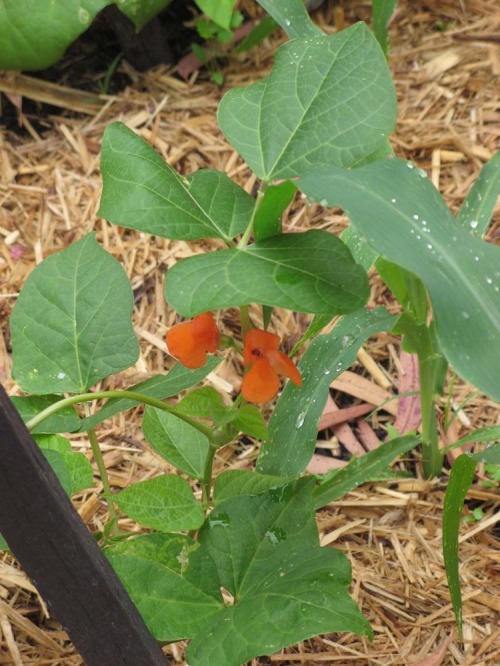 OK these nasturtiums are more red-ish than red, but you don’t want to muck up a good theme! 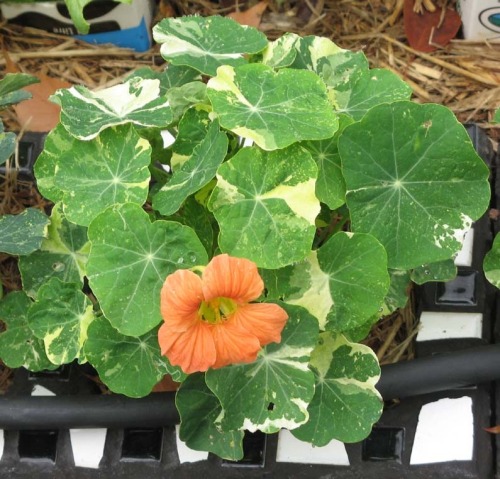 And last but certainly not least we are having amazing success with our Sturt Desert Peas. Grown from seed we bought in Broken Hill two years ago,  we are desperately trying to ensure that the snails don’t find them before the flowers are fully out.

You may be familiar with a wallpaper designed by William Morris called The Strawberry Thief. Both Morris and hs designs are icons of the English 19th century Arts and Crafts Movement.

So segue 130 years and to another garden in another continent and here are my own strawberry thieves, not Morris’ thrushes, but a galumphing great Pied Currawong! 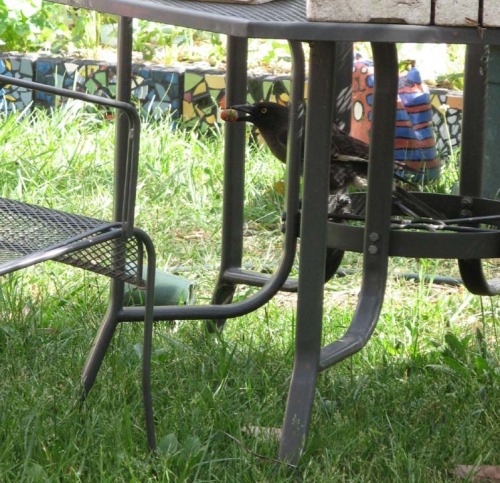 To add insult to injury, the young currawongs have taken to using the roof of the mesh chook run as a trampoline. 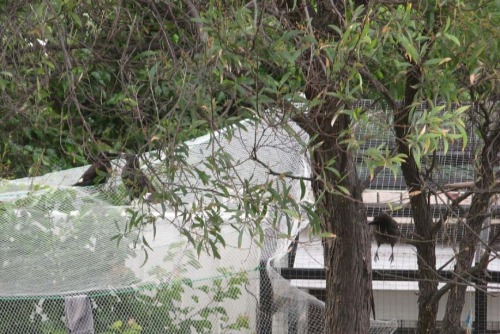 The chooks are not impressed!

Each year we like to try growing some new veggies. This year we’ve added kohlrabi and okra to our list. The kohlrabi came to us in the form of excess seedlings from our friend M; the okra we’ve grown from seed.

The kohlrabi is a member of the cabbage family and tastes, well, pretty much like cabbage. Unlike the more familiar members of this family it forms a swollen stem which is the part you eat. 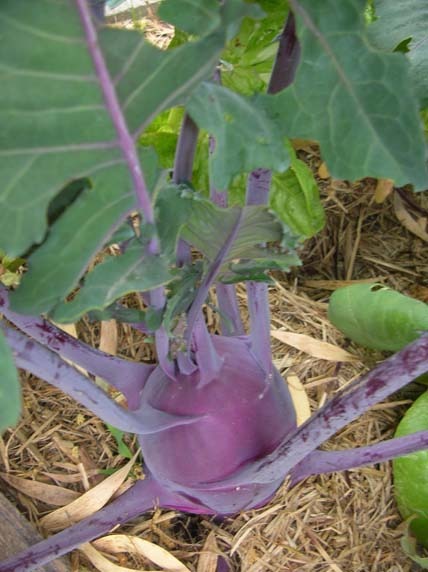 This week we’ve cooked it in the juices of a very tasty rabbit stew. We’ve also grated it for coleslaw which is certainly a lot less fiddly than finely slicing cabbage. Of course this plant does have that other characteristic I like so much – its purple and green colour combination!

Speaking of which our purple Sicilian Broccoli has finally come to a head, which is good news given my concerns a month ago with it being eaten by our local possum.

While growing broccoli isn’t a new thing for us this is the first time I’ve grown this particular variety. I’m not sure that I’ll be breaking my neck to grow it again. I’m thinking that I get a much greater amount to eat from the same number of purple sprouting broccoli plants as I do from this variety. Oh well, live and learn.

Last but not least we have decided to try and grow okra this year. We made rather a pathetic attempt to grow it several years ago which resulted in one pathetic seedling that could barely hold itself up, let alone produce any pods. 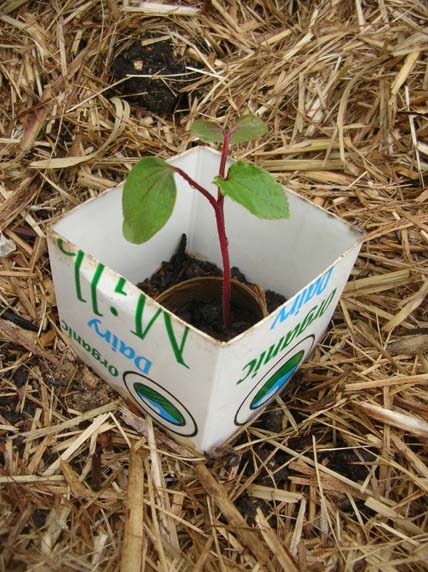 I’m hoping for better things this time around. We’ve planted two varieties, Clemson’s Spineless and Burgundy. The picture is of a Burgundy seedling. We had a much better strike rate with the Burgundy seedss, but now they are in the ground there doesn’t seem to be much between them. Another experiment to watch and hope for a better result this time around.

OK this post is nothing to do with the Blue Mountains, rather it’s about my latest garden bed.

The ‘three sisters’ refers to 3 plants, corn, climbing beans and squash, that have been tradionally grown together across central and north America, that literally form a supportive growing community.

The idea is that the corn stems provide a support for the climbing beans to grow up and the squash provides a ground cover to help retain soil moisture and supress weeds. The beans will also provide nitrogen fixing in the soil which will help the corn to grow.

You are supposed to get the corn started in the bed first then plant the bean seeds next to it and then the squash.

As I was growing all the plants from seeds in the polyhouse and the beans were out-growing the corn I’ve skipped the initial step. So now all the plants are in the garden bed. The corn is Blue Popcorn, the beans are Scarlet Runner and the squash is Butternut Pumpkin.

Assuming this lot survive the snail/slug/slater onset starting later tonight I’ll try and post updates on how the bed is growing.