For the second year in a row we have bought a whole pig to make cured meat products, such as prosciutto, ham and bacon. This free range white pig is 60 kilos worth of porky delight.

Unlike our forebears, we at least have the convenience of refrigeration to allow the process of preparing all these products over a period of days. On the downside that means you don’t get the whole community/family dropping by to help with the processing – ah the loneliness of the long-distance preserver.

The pig is always TB’s project while I cheer him on from the sidelines and give taste evaluations as necessary. He does all the important calculations for the brining and seasoning, not to mention all the hot and cold smoking.

We draw on lots of different curing traditions to preserve our pig. TB is making family favourites such as lap yuk, sometimes called Chinese bacon, and pork bones as well as some of the more common European products. Just in time for this year’s curing TB has found another book by those ‘gods’ of charcuterie Michael Ruhlman and Brian Polcyn, called Salumi: The Craft of Dry Curing (Norton 2012). I’m looking forward to my favourite frankfurters and some tasty smoked hocks for hearty winter soups.

Luckily some of these products are processed quite quickly. We have already been eating one of the small hams and last Sunday we had a streaky vs Canadian bacon taste off. The only trouble was that I was so busy tasting that I forgot to take a photo. Maybe next time.

It’s been a week of mixed blessings at Chez Fork. Today we received a totally unexpected package from one of TB’s family in Adelaide. It is a wonderful selection of cured meat products, metwursts, bacon and fritz (or devon if you’re from NSW), which came from Linke’s Butchery, in Nuriootpa in the Barossa Valley. All these items are made on the premises and we know from past forays they taste very good.

We were really thrilled and got straight into eating the fritz with our lunch. There could be bacon on the menu this Sunday morning I think.

On the not so good side we have just found out that we have a termite infestation in our house. The treatment to get ride of the termites will start next week. Thankfully the treatment is by baits in closed containers so our land will not run the risk of contamination which was a problem when spraying was the standard treatment, not all that long ago.

One unexpected result of this discovery is that we cannot continue with the regeneration of our front garden bed which was started just two weeks ago. It turns out that if we disturb the termites they may retreat to their home nest and that will nullify the baiting process.

The termite-chewed woodwork (the posts and planks in the photo above) went before we found out we had a problem with an active termite nest.

It will take at least a month, possibly two before we will know whether the termite treatment has worked. Until then we’ll just have to stick to working in the back garden well away from the house.

I’m sure you won’t be surprised to hear that we had bacon and eggs for breakfast this Sunday past.

Our clever young chook managed to lay us just enough eggs and TB’s small portion of bacon was just ready to eat. 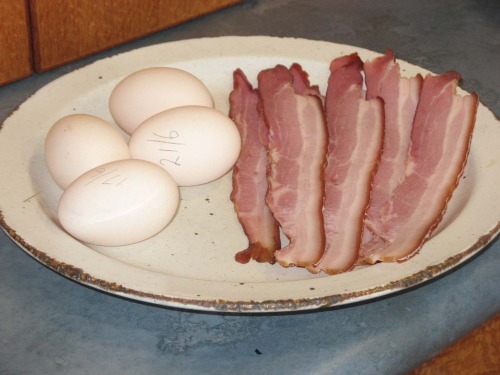 The meal was accompanied by our homemade bread. 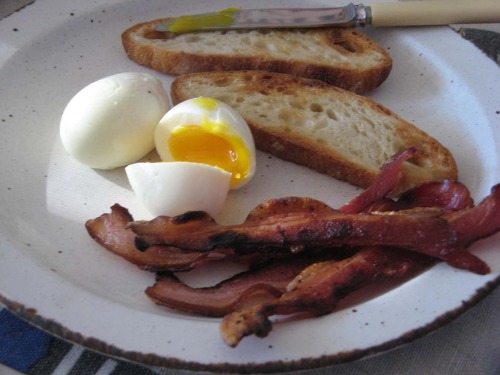 And a bit of sunshine!

This week TB finally bought home a pig. Well almost all of one, minus the head and front trotters, and yes it had already gone to the great paddock in the sky. This was a relatively small, about 50kg free range female porker, which TB ordered through Jordo’s Chop Shop at Waniassa. 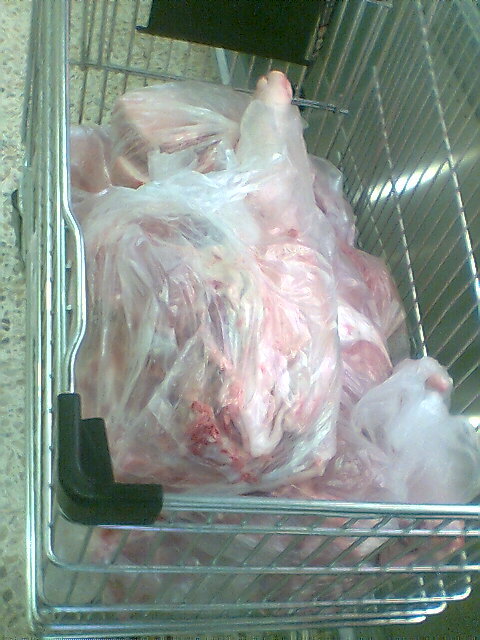 A trolley full of pig

It’s long been TB’s goal to break down and prepare a whole pig for a range of pork products and winter is the best time to do so. Traditionally you killed your pig so you didn’t have to feed the it through the harshest season of the year. Winter was also the perfect time for making cured products where you had the cold dry air to help preserve your meat.

There is a large upfront cost to buy the pig, although at just over $8 per kilo it is quite cost effective when you consider what you would pay in-store for the finished products. The next biggest input is your labour. The other ingredients used for curing, such as salt and sugar are quite cheap.

The pig came cut up into the two back legs, the belly cut into two loins and two streaky’s and the forequarters cut into the hand (that is the front leg) and the shoulder and some sundry bones. All the bones were ‘in’ so one of the first jobs was to trim and take the top bone out of the leg to make a prosciutto. 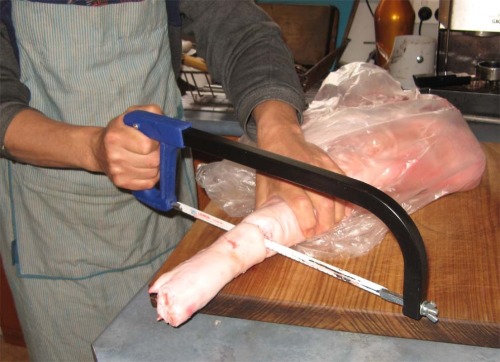 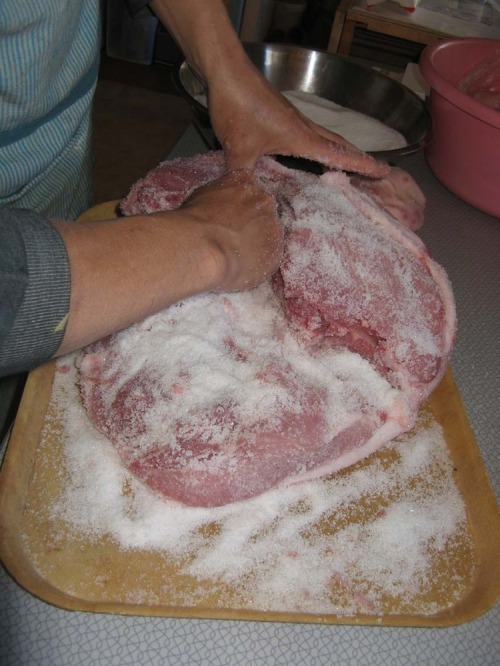 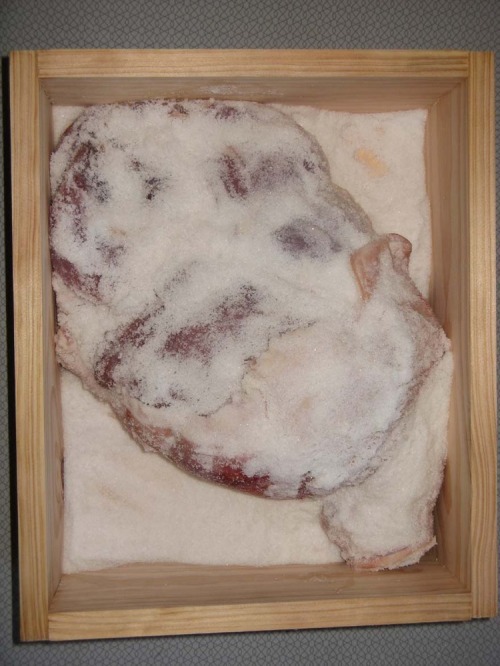 Having taken most of the bone out, the meat was salted inside the cavity, then placed in a box surrounded by salt and then weighed down. The meat will be left to cure in the salt for approximately 18 days. After this the salt will be washed off and the leg will be hung to air dry.

Next up came the loins which were variously cut for roasts and chops. 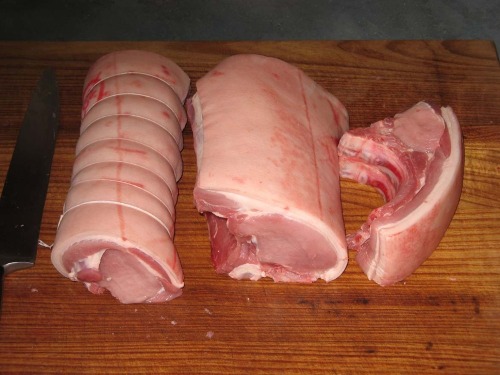 The chops on the right ended up very tastily on our dinner plate that night, along with our homegrown potatoes, carrots and garlic. 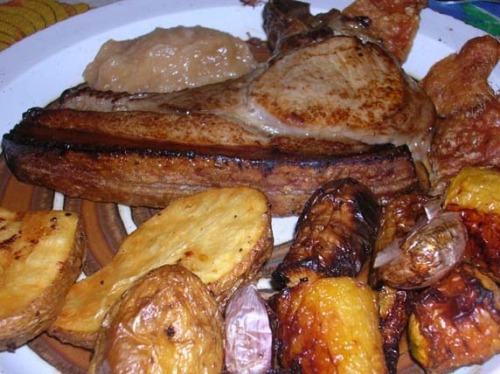 I was very impressed by the tender, succulent meat which had been lightly brined before cooking.

Of course there was still plenty of pig to process. Quite a few pieces made it into a wet brine. Some of these will become hams. Most of the ‘sundry bones’ ended up in the brine, but were subsequently hot smoked in the BBQ kettle. 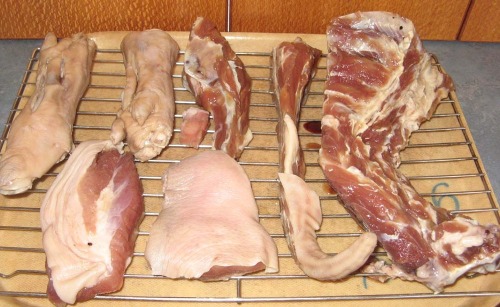 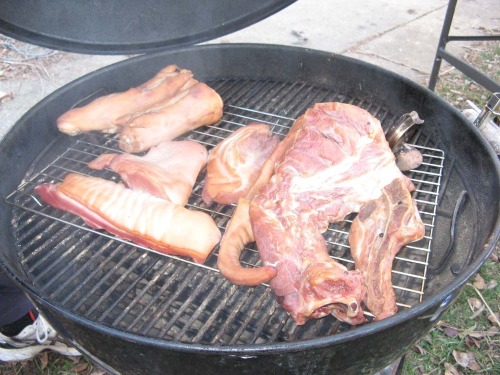 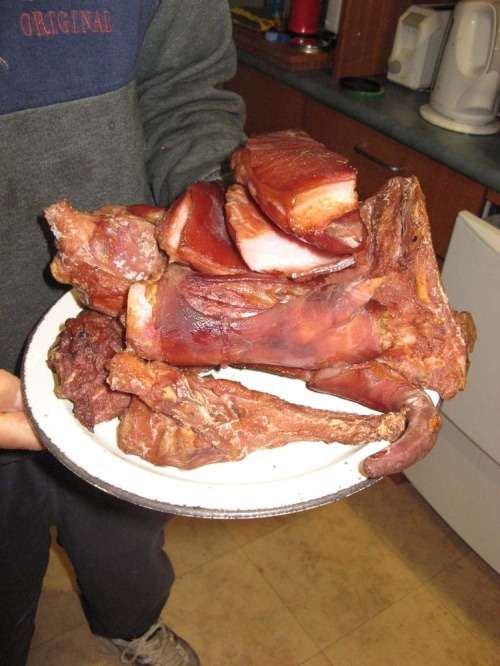 These will be used primarily for soup stocks. However we did sneak a piece of pork belly in the mix so we would have some tasty bacon in the not too distant future.

A loin fillet was placed in brine for only 20 minutes and was pan-fried along with mushrooms and homegrown pumpkin and potato for dinner the next night. 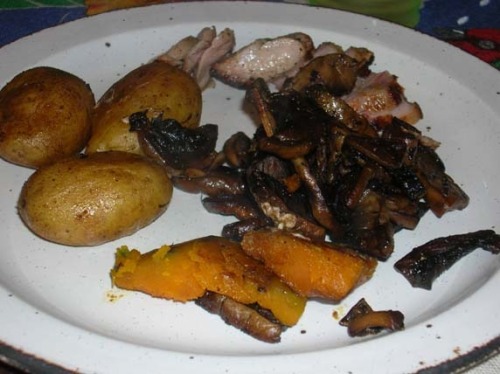 In all it took TB two days to do the basic cutting up of the pig. There is still plenty of work to be done. Sausage and salami making awaits.!