With the slightly warmer weather this past weekend we’ve been not only out and about but also out and doing in the garden.

On Saturday our friend J invited a group of us to come over for an afternoon tea and catch-up. I seem to recall spending all my childhood Sunday afternoons at my grandparents place for afternoon tea with the rellies so I knew the format. First a leisurely stroll around the garden. J has made great strides in her garden rennovations, removing scraggy ivy invading one space and re-planting with native plants. Now this space invites sitting with a cup of tea and a good book.  New wooden louvre partitions suddenly make the barbeque area into a distinct area for eating and a new bird nesting box is encouraging local native birds to drop by for a longer stay. Of course the veggie garden got a look in. It’s currently undergoing a major rennovation so the central patch of Jerusalem artichokes had been dug out – which led to that other afternoon visit tradition of claiming a garden memento – in this case some Jerusalem artichoke tubers – to take home.

Then there was the food … 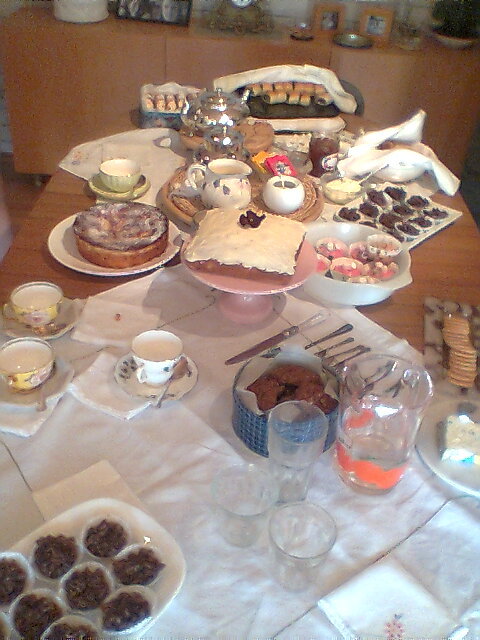 in copious quantities! Sherry cake, anzac biscuits, sausage rolls, apple cake, and grown-up chocolate crackles with sultanas and flavoured with cinnamon. One of the most popular choices were the cupcakes made by the youngest member of the party. 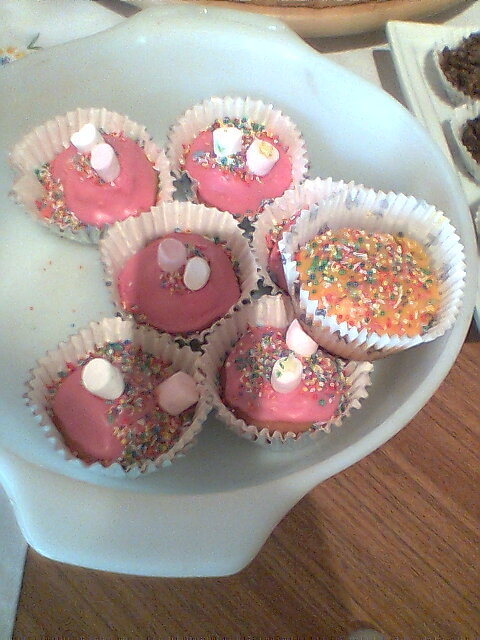 I’m sorry, but I ate the one with the bright green icing before I thought to take the photo. Ah happy days! One thing that is an improvement on Sundays at my grandparents house – they certainly didn’t have as capable a barrista on hand as J’s husband proved to be.

Having eaten far too much on Saturday afternoon, TB and I spent Sunday out in the garden. I actually did plant my Jerusalem artichokes, in a tub, as they are renowned for their abity to spread pretty quickly, not to mention permanently, through your garden if left uncontained.

I also picked the remnants of my green tomatoes (not soon enough it turns out, for some were too frost damaged to be useable) to make my regular supply of green tomato pickles (recipe from A Year in a Bottle by Sally Wise).

Of course we did have to have a break and eat up some of the left over canoli filling in some puff pastry – marscapone, ricotta, with citrus peel, almonds and flavoured with rosewater – that didn’t get used up for the afternoon tea on Saturday.

We also decided it was time to harvest the Warrigal greens before the leaves were completely anihilated by the frost. 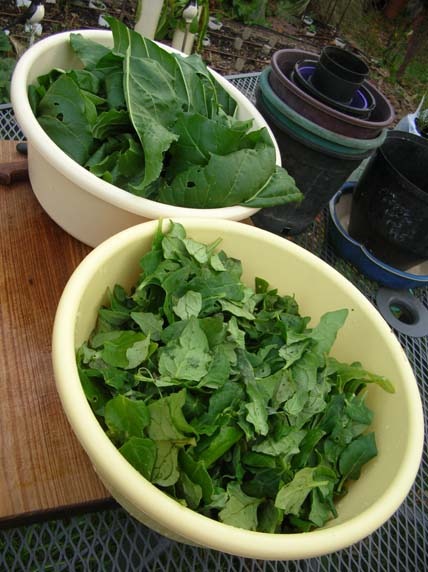 Along with some Perpetual Spinach they were used to make up a large amount of canneloni – some for now and some for later. Oops, I couldn’t wait to try some.

While I was out the front picking my tomatoes and cleaning up the very dead pumpkin vines I got chatting to my neighbours who told me that where they were digging they were going to plant a veggie garden as they were over supermarket veggies. Good for them!

The best thing I find about about pumpkin vines is when they finally die down you are liable to find a whole lot of pumpkins that you didn’t know you had, like these four Baby Blue Pumpkins.