When we decided to travel around Tasmania one of the things that interested me most was getting the opportunity to taste lots of local produce. But it turned out to be not quite as easy as it seemed.

In Tasmania there is lots of food marketted at tourists, but it is not always what you want and is often sold at ‘tourist’ prices. My best tip for the travelling ‘foodie’ is to check out your local IGA. Yes, I’m serious. We consistently found more good Tasmanian produce at these supermarkets, at a reasonable price, than any other location.

Take the Queenstown IGA for example. Here we found a kilo of leatherwood honey for $7.50 (compared to about $15 for 750gms in a fancy tin – the same tin sells for over $20 in Canberra), wallaby sausages, duck and venison sausages and also lots of Tasmanian jams and preserves. The IGA in Salamanca Place Hobart, also has a great range of produce. Our friends found their favourite Tasmanian quince jam there and TB outdid his previous best effort on leatherwood honey by securing a 4 kilo tin for $32! At the IGA next to the caravan park at Hadspen (outside of Launceston) we found King Island beef and salted and un-salted cultured butter from the nearby Meander Valley.

Apart from supermarkets there are lists of food and other community markets available online and there is also a printed guide to the farm gate stalls around the country (most useful in summer and autumn).

We only made it to one farmers market, the one in Hobart called the Tasmanian Farm Gate market. Its open from 9.00am to 1.00pm, every Sunday, at the Melville St carpark in Hobart.

While the market is physically smaller than ours in Canberra (it’s just celebrated its 2nd birthday), we found the quality of produce and variety of stalls to be very high. 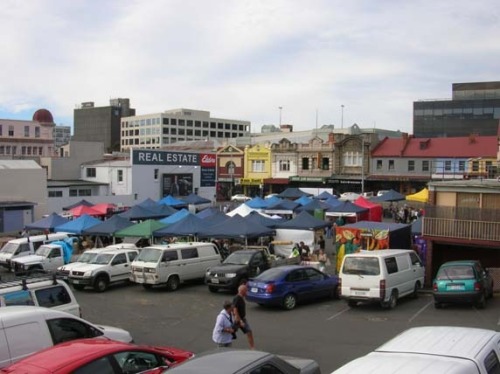 I was heartened to see that as well as all the fresh produce and product that there was a big queue at the stall selling vegetable seedlings. Taswegians appear to be very keen veggie growers.

My first stop apart from doing a big circle around all the stalls was to buy some goats cheese from Yondover Farm House Cheese. I picked their Fresh Chevre, which won a gold medal at the 2011 Hobart Fine Food Awards. They have subsequently been invited to show at a prestigious competition early in 2012. Good luck! its a truly wonderful young cheese.

We couldn’t ignore the tasty treats from Little Missy Muffin, who were not only selling their delicious pastries and biscuits, but were actually cooking as they went in a small portable oven.

After that it was down to the serious business of buying vegetables for a soup for dinner that night (we had all been indulging in too many holiday treats!). The veggies were just fantastic. 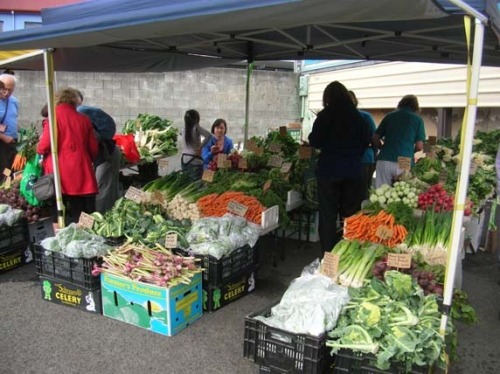 TB bought baby leeks, broccoli and potatoes for the soup. In the interim, friend M and her partner (who we were travelling with) had discovered something completely new to me, Silver Hill Fisch salmon sausages. In this case they were flavoured with ginger and lemon myrtle and proved to be a great second course for our dinner that evening.

So if you have access to a good camp kitchen or your own campfire you too can eat well and locally while travelling in Tassie.